The volatility in fashion and textiles manufacturing output continued in May 2016 as the gains made in April were wiped out and the Index fell back to the level it was at in March at 88.3 (with 2013 equalling the average of 100.)

Wider manufacturing also saw a slight fall although the index remains ahead of where it was in 2013 with the value at 104.2 indicating growth in this period.

Whilst employment and export figures have been bouyant in recent years and months (both reaching contemporary highs recently) output for the previous year has been on a downward trajectory with the odd month spiking in activity.  This matches the recent downturn in investment made by businesses so could suggest both the uncertain global climate and sentiment in the run up to the EU referendum was impacting on manufacturers order books and investment decisions. 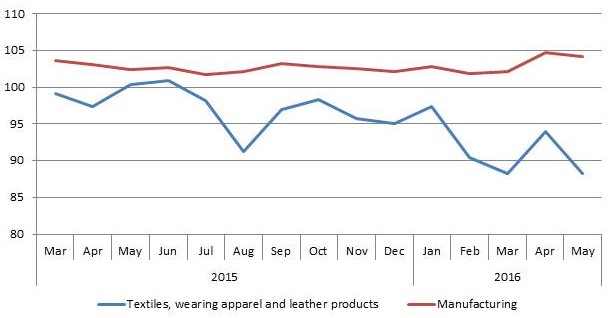