Both Drapers and Fashion United online have seen little change in job vacancy advertisements over the past week.  However, on the four week scale, there has been a large slow down in both cases.

Drapers Online advertised 1,908 vacancies on Friday 3rd June.  The most popular vacancies advertised were for design, merchandiser and sales roles. 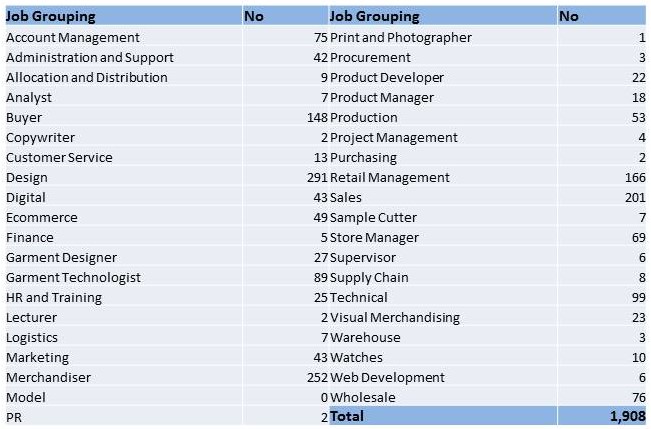 On a weekly scale, there were two additional vacancies on the previous week.  However, on the four week scale, vacancies are down by 133.

On the four week scale, design, digital, production, watches and visual merchandise have all seen modest rises.  In contrast, large falls in vacancies advertised for wholesale, account management, retail management, garment technologists and technical have all been observed.

Figure 2: Drapers Online vacancies on one and four week scales

Similar to Drapers, there was little movement on the Fashion United scale with a small fall of seven vacancies advertised.  Retail management and in-store was the largest gain on the week with 15 more vacancies.  However, it has also performed worst on the four week scale, down 163 vacancies.  Overall, vacancies are down 248 on four weeks before.  Only internships have seen a rise in this period.

n.b. Drapers and Fashion United job vacancies correct as of Friday morning.  Both job portals also include a number of non-UK based roles.