Both Drapers and Fashion United advertised fewer vacancies this Friday compared to last weeks figures although both publications have been posting a greater number of vacancies compared to four weeks ago showing a continued upward trend as we head into summer.

Drapers advertised 2,021 vacancies, 110 vacancies down on last weeks numbers.  Greatest demand was for design and merchandising occupations whilst sales and retail management requirements continued to be strong.

Figure 1: Drapers vacancies on 6th May 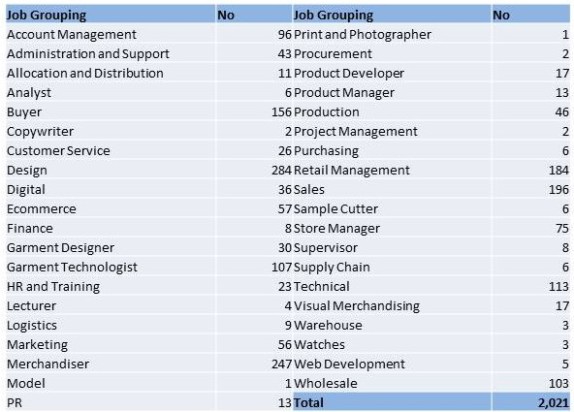 On a four week basis, vacancies are 163 higher than at this point.  In terms of increases in advertisments, design, wholesale, account management and store management all recorded increases.

Fashion United had a small decline in vacancies advertised, down by 8 on the previous week.  However, Fashion United vacancies have like Drapers shown a strong growth over the four week period with a particular increase in retail management and in-store vacancies.

n.b.  Vacancy information correct on Friday morning in each instance.