Good news from the ONS shows the fashion and textiles manufacturing sector in q2 2015 added another 1,000 jobs on the q1 figures using their labour force survey measure (survey based which includes self-employment and is one of a variety of measures for employment in the sector.)

This brings the employment rate in the sector back up to q1 2014 levels and the third consecutive quarter of growth although still short of the 122k reported in December 2013.

Picking out the key trends

The bounce in textile jobs saw an increase in male employing within the sector with 55,000 males now employed in the sector, the highest since December 2013. Female roles in the sector have declined to around 60,000, 6,000 down on December 2013. This shows in many respects the strength in textiles employment growth and relative stagnation within apparel manufacturing job creation, both industries with clear gender differences in their gender composition.

What kind of jobs?

One of the major findings of the UK employment figures has been the rise in part-time working which now represents 27 per cent of all employment in the UK.

The fashion and textiles sector currently has 24 percent of its workforce employed part time. However, the sector has seen full-time work expand substantially in the past four years, a pattern consistent with the workforce requirements employers are reporting as order books fill. In the same period, part time working has fluctuated; much to do with the needs of apparel industry and the cycles based on demand requirements. The 29,000 people currently in part time employment is the highest since December 2013. 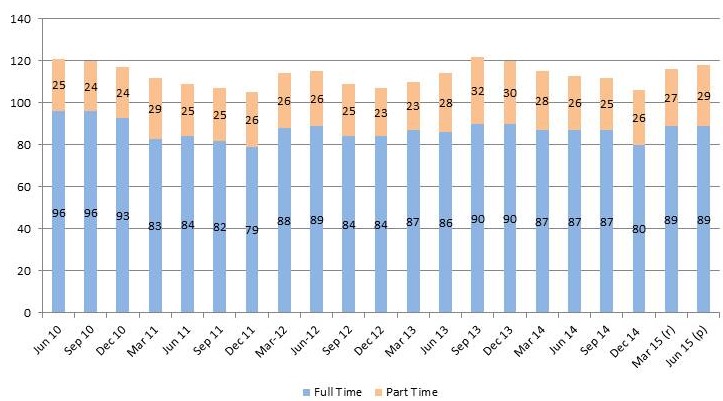