An interesting analysis of the Index of Production shows how the textiles sector has fared compared to other sectors of the UK economy in the millennium and more recently since 2011. Telling the story of the millennium and the continued move within Britain to a service economy, only four sectors have seen growth since 2000. Driven by major car producers investing in UK car production, such as most significantly and successfully, Tata’s investment in Jaguar Land Rover, manufacture of transport equipment has seen the greatest and most significant rise with its production value rise of almost 50%. Pharmaceuticals, food and machinery not elsewhere classified were the other risers in production since the millenium although the recent downturn in pharmaceutical investment such as the closure of Pfizer’s research and development site in Sandwich has seen pharmaceurical production sharply decline in recent years.

Textiles manufacture has seen the greatest fall compared to all manufacturing sub-sectors in the production index since 2000, recording an almost 40% decline. This reflects the impact globalisation, trade agreements, improved logistics and most significantly the highly labour intensive nature of the sector that saw it more vulnerable to off-shoring than other UK manufacturing sectors.

Other manufacturing sectors who were at most vulnerable to global economic changes such as the manufacture of coke and refined petroleum, and computer and electronic and optical products and electrical equipment have also experienced declines which highlight the significant price sensitivities of production associated with these sectors.

However, the figures from 2011 for textiles manufacturing show how production decline has slowed significantly by only 11% between 2011 and 2014. Again, only transport equipment manufacture has seen significant increases in this period. In many ways this indicates the difficulties the manufacturing sector has felt attempting to gain traction post-recession. In the case of textile manufacturing, there are a number of factors at play and recent reports which point to a bright future for manufacturing within the UK fashion and textiles sector with positive sentiment being exhibited in the sector.  Whether this translates itself into productivity as it is beginning to do in employment is a key question. 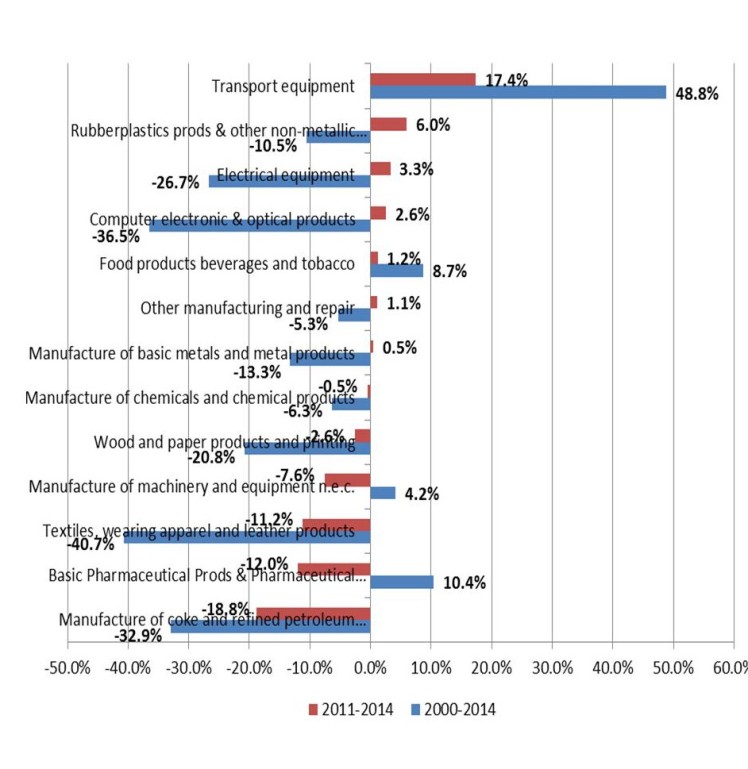